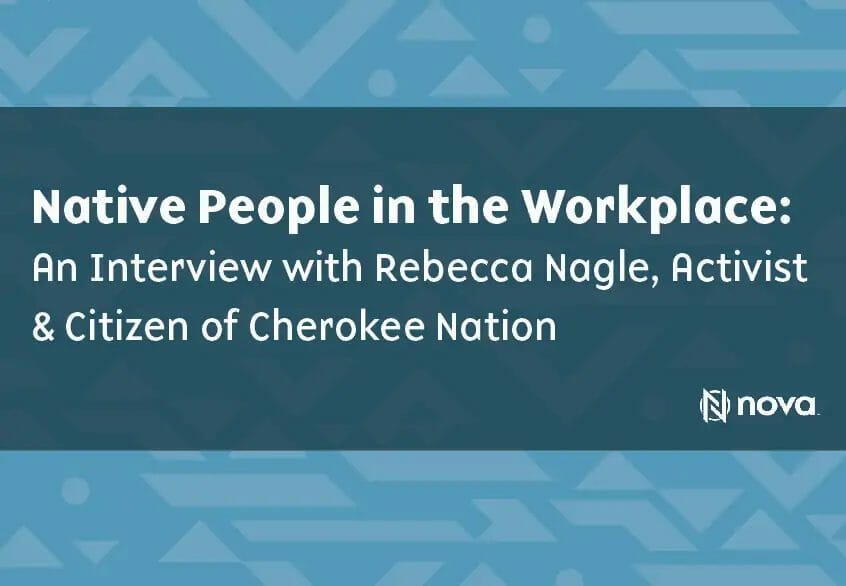 Native at Work: An Interview With Rebecca Nagle

The great Maya Angelou wrote, “There is no greater agony than bearing an untold story inside you.” This was the case with my late Grandmother, Julia Sifuentes. All my life I was told by my Mother about our Native American heritage, but I was never allowed to ask my Grandmother about it. In the early 1950’s, Julia left an abusive father behind, and started a new life in Chicago after meeting Jose Elizondo while working in the fields as a migrant worker. When we lost Julia in 2018, I started to research our connections to the Comanche Indian Tribe my Grandmother’s Father belonged to, and I found out more about what it means to be a Native American than I had ever thought possible.

For instance, to be recognized as being a member of a tribe is up to the Tribal Nation, and every tribe has its own criteria. Before beginning this process I always assumed you could identify this claim with a DNA test; however, I quickly learned that this is not how it works. Because each of the 537 recognized tribes¹ have their own process, their own criteria.

My Native identity has many complications, and as we know “Identity” in general can be a tough subject; especially if you, like me, identify as “mixed”. The category you move in and out of over the course of your lifetime can be exhausting, but it can also provide a lens at a very young age that allows you to understand bias through multiple perspectives. As a bi-racial, bi-sexual, cis woman who has an invisible disability, I find it critically important we find ways to push past the binaries and think about the ways in which we identify ourselves, and the ways in which we identify others.

So what does this mean for those of us out there who romanticized about our “long-lost half Indian grandfather”? It means there is a process in which you can research these claims, which is important to validating your ancestry. And it requires awareness and humility about what tribal membership can really mean, and a respect for those who currently do (and many who always have) identify as Native and are fighting daily to protect the rights they were granted after the Indian Civil Rights Act in 1968.

Last week, I had the opportunity to sit down with activist, writer and the host of “This Land” podcast, Rebecca Nagle. Nagle is a citizen of Cherokee Nation and a two spirit (queer) woman. As the co-founder and co-Director of FORCE: Upsetting Rape Culture and The Monument Quilt, Nagle organized national art and advocacy projects to create a culture of support for survivors. During our interview, Nagle carefully explores the complexities and unique challenges Native folks might experience in the workplace. *This interview has been edited and condensed for clarity.

In the workplace, what challenges have you been met with?

Very often, when I introduce myself, someone will mention something like, “My family is part Native American, or my great- great grandma is half Native, but I don’t know what tribe they are…” And I think anybody who is going to make that kind of statement, has a responsibility to look into it. I think one thing people need to understand and realize is that the idea of a great, great, great Native something, is only possible when Native people aren’t real.

What do you wish non-Native people understood about native rights?

What is one suggestion for creating a more inclusive environment for Native Americans in the workplace?

I think one thing that can be challenging for native professionals is that often we can be the only Native person in the room, and that experience can be really isolating. It can be really hard to have to constantly explain and translate things, and so for people just to have an awareness of that reality and to try not to put it all on one person; try to be aware of how challenging that position is, and then try to do things to mitigate it.

We know Nova isn’t the only company out there that believes in a more inclusive culture in the workplace, so isn’t it time to create workplaces that are inclusive to Native folks’ experience? This can be as simple as taking control of your own education around Native American history, issues and present-day experiences. Native Americans still exist. They work, they breathe and they live on this land.

More information about Rebecca Nagle can be found at here .
Additional resources to learn about Native history and present-day issues:  https://narf.org/nill/resources/roots.html

If you are interested in researching your native ancestors, there is a process online for each individual Tribal Nation.