Skip to content
How Inclusive Are Your Everyday Word Choices?

How Inclusive Are Your Everyday Word Choices? 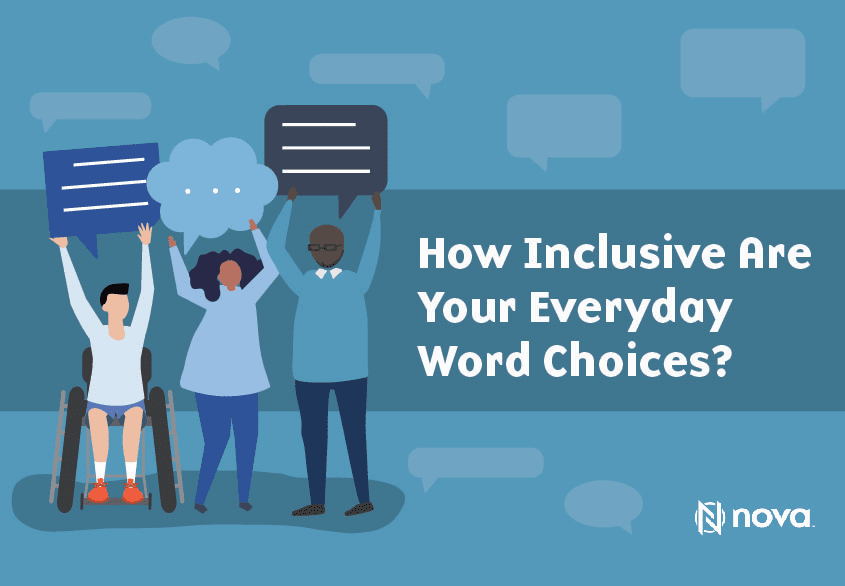 Human language is an incredible thing. Homo Sapiens create new and evolved ways to express ourselves all the time, almost at a breakneck speed. How many times do we look at movies from the 70s or 80s (and even more current) and cringe, thinking ‘Yikes, I can’t believe we used to say that’!.

Being on an active Diversity, Equity and Inclusion (DEI) journey means having a mindfulness of language and staying open and aware of the impact language has on our society, especially on marginalized communities.

Sometimes these types of language call-outs can be dismissed or labeled as “too politically correct”. We understand that there is often no malicious or ill intent in using these seemingly-innocent phrases. And at Nova, we believe that when we know better we do better. And there is no word or turn of phrase so precious or precise that it is worth excluding or harming individuals for.

Below are a few simple turns of phrase* that can be ditched in the workplace to build a more inclusive culture.

In your next meeting, try to count how many times the word “guys” – as in “you guys” – is used.  Probably a lot. Saying “you guys” is an easy way to address a group of people and has become ingrained in American-English shorthand.  The impact, however, is to reinforce a male-centered norm in our workspaces. Instead of referring to all groups as inherently male, try updating your lexicon with options such as “you all”, “these folks”, “this team”, or any other gender-neutral term.

Similarly, we often use gender identifiers based on how we interpret someone’s gender.  Even if our assumptions align with that person’s gender identity, some of these words can be interpreted as condescending or patronizing, depending on the context.  For example, a man calling two women “Ladies” might seem respectful and polite from his perspective, but may be interpreted a different way by the recipients. And if we don’t know how someone identifies we should be mindful of being neutral until they have self-identified.  Referring to someone as a “person”, or using “they/them” until we know their preferred pronouns avoids assumptions and potentially mis-gendering someone.

There are numerous ways that indiginous and native references have been baked into our culture.  Sadly, these are often caricatures of native culture – much like the mascots and imagery we see for sports teams.  Phrases like “pow wow” are similar in their caricaturization and appropriation of native culture. Use “meeting” or “huddle” instead.

We often hear things defined as “crazy”, as in, “that was a crazy meeting”, “that client is insane”, etc.  Sometimes we hear it more explicitly as “she is so bipolar” or “I am so OCD”. Truth is, all of these are euphemisms for mental illness – a very real and often invisible disability that affects roughly a quarter of the population in some way.  Describing erratic behavior as “crazy” reinforces the stigma that people with mental illnesses are out of control or, even worse, dangerous. We find that we have the opportunity to be more precise in what we actually mean and not default to these ableist catch-alls.  Did you have a client yell and scream at you? Describe her behavior as loud and aggressive. Was a meeting disorganized and confusing? Describe it that way. In this case, precision is our friend – we can more accurately describe what we are trying to communicate by staying away from the generalizations.

5.“Blindspots, Onto Deaf Ears, Walking the Walk”….the list goes on and on

There are numerous ways we work ableist language into our everyday speech patterns.  So many turns of phrase assume and center physical ability, or make an impairment of a disability.  Be mindful of how ableism is creeping into your turns of phrase and intentional about finding replacements.  As Rachel Cohen-Rottenberg wrote on DisabilityandRepresentation.com, “If a culture’s language is full of pejorative metaphors about a group of people, that culture is not going to see those people as fully entitled to the same inclusion as people in a more favored group.”

WE create the culture, set the tone and evolve the narrative in our workspaces and communities, not Merriam-Webster.  Language evolves swiftly and we have the opportunity to embrace that evolution and share best practices as they become available to us.  Staying curious about language and evaluating how inclusive your language patterns are is all part of a healthy DEI journey.

Now go out and spread the word!

*There are countless more!  Tell us what you’ve noticed or worked on updating in your own language.